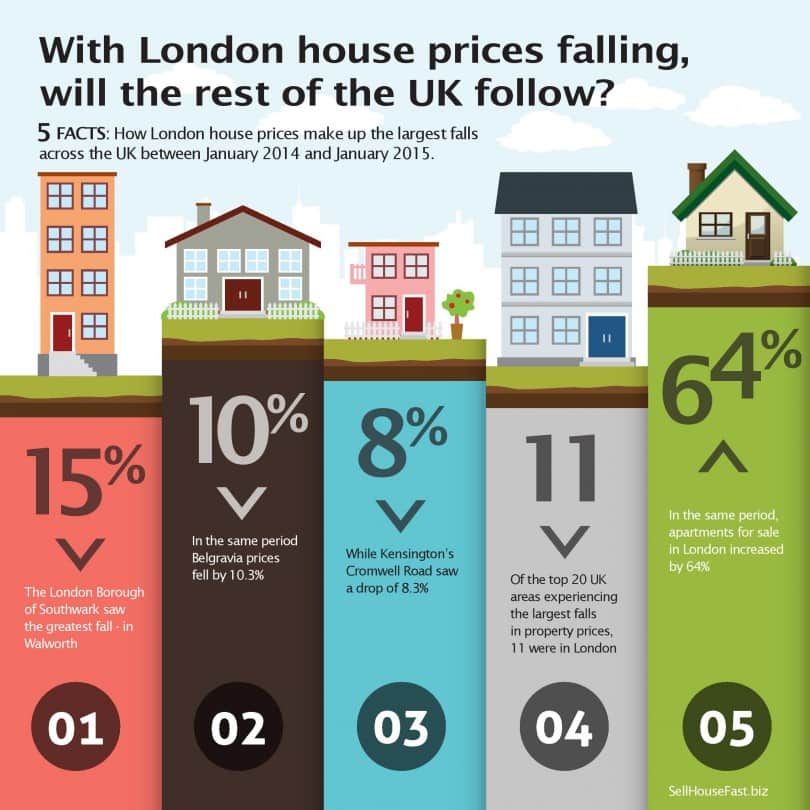 UPDATE September 2016: Brexit has occurred Since this article was written about the London Property Market, and will continue to affect property prices and values.

Has the central London property market bubble finally burst. Are London house prices falling? The index data, released February 2015, was taken between January 2014 and January 2015 and certainly suggested as much.

The report by www.home.co.uk even points to the wider Greater London housing market feeling the fall too.

But it’s central London areas where the prices fell the most, as supply outstrips demand with more and more properties finding their way onto the market, and investment confidence slips away. But will this last? No matter how many houses for in sale in London there are at any point in time, prices in the Capital always seem to be on the increase.

While property experts report big variations across the UK, with Scotland, Northern Ireland and the North West of England seeing the greatest growth in property values, London is the only location where property values are falling.

Even so, RICS (the Royal Institution of Chartered Surveyors) stated that it is unlikely that house prices will continue to dip.

Naturally, Landlords’ are feeling the inevitable squeeze with returns in central London housing investments also in free-fall. The report details that of the 15 UK locations recording the greatest depreciation in % yield versus annual rents, 12 are in the centre of London.

To bring the point home, since November 2013, the value of a typical flat found in Belgravia has fallen by 20% – that equates to nearly £400,000 depreciation in value. And in Islington, a similar picture emerged with property values dropping by 11% in March 2014 – which represents a loss of £85,000.

In contrast, an increased 11% more property surveyors report house prices rising across the UK rather than falling, but still marking the slowest pace of growth recorded since 2013.  However, by December 2014, 36% of surveyors in London reported property values falling rather than rising.

Will Falling London House Prices spread to the rest of the UK?

Further to this, the evidence indicates the ill wind that has hit London will also spread its gloom into the South East. So the realisation of the dreaded phrase ‘negative equity’ could be coming home to roost in the homes of many recent buyers. But it’s fair to add that the South East has enjoyed an incredible boom in the last few years. Perhaps this is just the market sorting itself out with prices falling back to where they need to be, maybe not. But this could be grim reading for more recent buyers.

However, the UK housing market is still regarded optimistically in the rest of the country, which has experienced slow but steady growth. For many, it will naturally come as a shock to see London house prices falling – the capital of capital growth. And the fear could spread that the bad news may travel North of Watford and have a knock-on effect.

How do I sell my house fast today? Easy, contact Flying Homes the Capital’s favourite property buying company in London! If you need a quick house sale, then contact a trusted property buyer like Flying Homes, 0800 68 99 420.

Would you like a cash offer for your home?