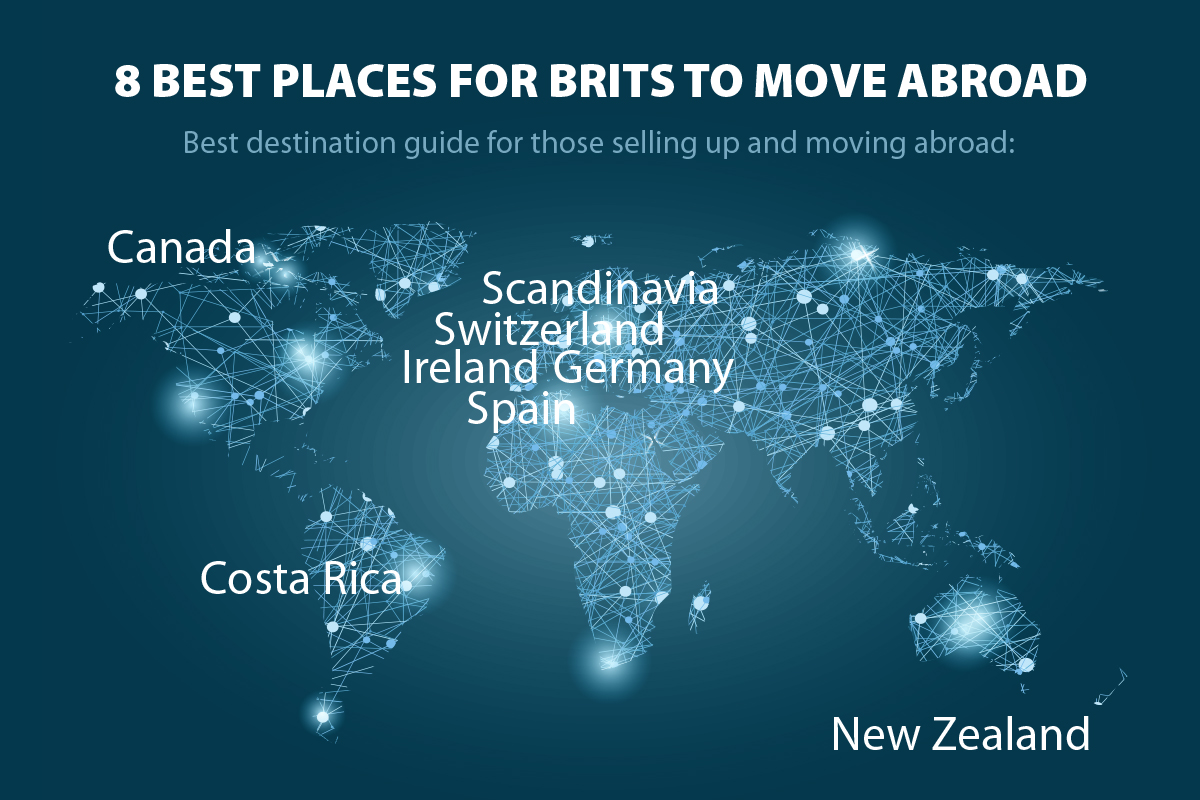 8 of the best places for Brits to live abroad

According to the BBC, approximately one in ten of us Brits live outside the UK. In 2016, just under 4000,000 people left the UK compared with under 300,000 in 2015 (University of Oxford Migration Observatory data).

Those seeking a new start overseas list the following criteria most important when selling their property, packing their cases and moving abroad:

We have a list of the top eight places to head to, read on for some inspiration.

Canada tops the table when it comes to quality of life. According to the U.S. News & World Report 2018 Best Countries, this North American destination is the No1 choice for a higher quality of life by taking into consideration – affordability, job opportunities, economic stability, income equality, suitability for families, political security, safety, education and health.

Compiled by the University of Pennsylvania and BAV Consulting, the report researched 80 nations, scoring them each on 65 separate attributes, ranging from gender equality to levels of state corruption. Canada also ranks highly for being business-friendly, entrepreneurial, modern, family-centric, retirees, green living and equality. According to Forbes, Canada is renowned for friendliness, and has been less affected by the 2008 financial crisis than its neighbour, offers more opportunities for employment and business growth. For those who love the outdoors, Canada is an excellent option for relocating.

Often applauded for their contented approach to life, Scandinavian countries boast low unemployment and crime rates, but high rates of satisfaction and happiness.

Denmark was No 2 in the Best Countries list, with Norway and Sweden coming up close behind. However, these countries are also in the top 10 most expensive places to live (Numbeo’s Cost of Living Index 2018), taking into account almost 50 factors including cost of transport, accommodation and eating.

according to Numbeo, One of the cheaper spots in western Europe to live, (by far the more affordable being the majority of eastern Europe), Spain has been a long-time favourite of British expats; according to a report by the UN over 300,000 Brits live here. With great weather, a relatively low cost of living and a more gentle way of life, hoards of Brits are popping across the channel to take advantage of the Spanish heat.

In particular, it’s popular for older Brits seeking a sunnier retirement. Spain boasts breathtaking architecture, beautiful beaches, historic cities and diverse culture, as well as being accessible from most airports in the UK. Many Spanish do speak English, but if you’re planning on relocating there on a permanent basis it might be a good suggestion to pick up a Spanish phrase book, si?

Famous for mountains, chocolate and cheese, Switzerland actually wins the award for the overall best country. The Balance nominated it as the 2nd best country in the world to work in, not surprising with an average annual income of circa £41,000, plus a good work-life balance and low unemployment.

Switzerland is well renowned for its unspoilt beautiful scenery, leisure activities like skiing and quaint culture, all making it a trendy winter destination. Switzerland also ranks among the top 10 best countries in the world for education, women’s rights, green living and equality. It is also listed highly as a destination to raise children, so if you are planning on moving as a family, it’s perfect.

But while Switzerland boasts an impressive lifestyle, it all comes at a cost, with it being labelled Europe’s most expensive country to live in (and 2nd most costly worldwide). However, if you have money to spare, Switzerland could be the perfect country for you.

According to the Happy Planet Index, Costa Rica is the happiest country in the world, apparently, nothing to do with its beautiful wildlife, idyllic beaches and stunning scenery like the gorgeous Rio Celeste waterfall. Costa Rica is both an adventurer’s dream and a peaceful paradise.

The average life expectancy in is over 79 years, which is higher than the USA and the South American nation’s literacy rate is also high at 97.8 per cent.

Another trendy destination for UK migrants, Ireland has become home to over 280,000 UK expats. Its proximity to the British Isles makes it perfect for those wanting to move there but may want to stay reasonably close to friends and family.

Ireland boasts beautiful countryside, often featured in the favourite TV series Game of Thrones. Ireland is a country, full of charm, music, beauty and tradition, beloved by visitors the world over.

The 2nd most populated destination in Europe, Germany has become more popular as a destination for UK expats; it has the 4th largest number of Brits, just behind Spain, Ireland and France. It also ranked 3rd for the best country.

Germany is a great place to move for individuals with a smaller budget and has proved popular with millennial Brits. On average rent in Berlin accounts for a quarter of the average German salary, compare that with rent in Copenhagen, which accounts for nearly a 3rd of monthly earnings. Germany is a popular destination for businesses and creatives and is renowned for being a welcoming and hospitable.

Another increasingly popular spot for Brits moving overseas is Australia’s closest neighbour. Mercer’s Quality of Living Ranking 2018, reports the capital city Auckland as the 3rd best city in the world to reside.

It is a friendly country, with 80 per cent of expats living there report it an easy place to settle in. People love the friendly culture and amazing scenery that meets them on arrival. And good news, New Zealand is relatively easy to move to; many of its industries need skilled workers to fill many roles.

In 2016, the town of Kaitangata hit the headlines by launching a recruitment drive to attract new residents – with an unusual issue of having too many affordable homes and too many jobs, but not enough takers to fill them.

If you prefer to stay in the UK, then check out our top ten cheap but charming towns in the UK!

Are you relocating abroad? Get a free cash offer for you home